Our March 2020 Hacker of the Month is a designer and technologist with over a decade of experience creating technologically augmented games, interactive artworks, and immersive theater. He currently works out of a studio in one of London’s premiere makerspaces, Makerversity at Somerset House, where he continues to explore new and exciting projects in a variety of forms and functions.

Tim graduated as an industrial designer in 2005, from a course heavily focussed on teaching traditional,  ‘problem solving’ design for everyday products like furniture, lighting, and appliances. Ultimately, this work wasn’t what Tim was looking for, as he thought there were already quite enough chairs, tables and hairdryers in the world, so he found work in architecture, where he had his first contact with 3D printing. He worked on lighting schemes and bespoke fittings for projects all over the world, ayt a time when 3D printing was starting to become more commonplace for the creation of scale models. Tim immediately saw the value in the iterative power of 3D printing for many aspects of innovating new ideas, even if the machines themselves were still prohibitively expensive

Desiring more creative freedom in the types of projects he made, in 2010 Tim attended a short course at the Copenhagen Institute of Interaction Design, where he was lucky enough to be taught an introduction to Arduino by its inventor, Massimo Banzi. This quick and accessible prototyping platform opened up a world of opportunity for making interactive artworks and environments, so on his return, Tim made the entirely rash decision to quit architecture and start East London Kinetics – a small interdisciplinary studio creating playful, interactive installations with custom electronics and software for commercial clients. During ELK’s four year run, Tim was involved in projects that included:

Open source NASA sound recordings that Tim and his team turned into audio and visual art.

All of these installations incorporated custom electronics, coding, and fabrication using methods ranging from CNC, 3D printing, laser cutting and more. The ELK installations, although varied in form and function, were all designed with play in mind, creating experiences for the audience that appeared magical but were also approachable.

In 2015, Tim helped to found Sensible Object, a game studio focussed on making titles that melded hardware, software, and electronics to create entirely new ways to play. One of their titles, ‘When in Rome’ was a travel-based game that used Alexa’s voice-prompts to push the game forward. With a simple world-map gameboard, a few tokens and an Alexa-enabled device, users could have a game experience reminiscent of classic VHS or DVD games like Sega Video Driver, Worlds of Wonder ActionMax, and the Scene It? series of trivia games, but this time with Alexa doing the boring job of running the show.

The Talking Throne – users select their names and titles, and the throne announces them with regal fanfare.

Beasts of Balance, another hybrid digital-physical game produced by Sensible Object, started life with two successful Kickstarters before becoming the first boxed game on sale in Apple stores worldwide, garnering awards for its innovative and fun, family-friendly gameplay along the way. Beasts of Balance is a Jenga-like physical stacking game that uses a collection of animal-shaped play pieces that players stacked into a tower, with each piece added changing the world on the digital game playing out on a wirelessly connected smart device Tim designed each physical piece as a three-dimensional model that were then 3D printed for playtesting, before being sent to manufacture in China.

“With the number of stackable pieces we incorporated into the game, and the fact that they were all completely different, the time needed to go from digital to physical form was greatly reduced by having 3D printing available as our production tool in-house.  Being able to quickly turn around changes to create new pieces or to make revisions was invaluable. It really gave us a way to close the time from prototype to final shape to a few weeks instead of months or years.”

The critical success of Beasts of Balance, and it’s many expansions, led the company to be acquired in 2019 by Niantic, the same company responsible for hits like Pokemon Go and Harry Potter: Wizards Unite; two games that also incorporate physical and digital gameplay.

Tim then went independent and was involved in two major projects in 2019. First was an R&D program with an immersive theater company called Punchdrunk, in collaboration with the Royal Shakespeare Company. Dubbed ‘experiential theater’, Tim worked with a team that incorporated a wide variety of disciplines to create a one-of-a-kind experience focused around the integration of technology into theater. Using tools like Bluetooth tracking via smartphones, RFID, instant messaging, MQTT messaging as well as sensors built into props and costumes, the team created an hour-long show incorporating, amongst other things, a game of human chess, a magical alchemist’s lab, a techno monk and an unhinged Dolly Parton tribute act.

A myriad of homebrew devices used in the PunchDrunk: Audience of the Future theater experience.

Also in 2019, Tim brought his experience in game design, interaction design, and 3D prototyping to work alongside Rob Daviau (Pandemic Legacy) and Isaac Childres (Gloomhaven) in resurrecting one of the most well-known, cult classic board games of all time; Dark Tower. In this new imagining of the game, Tim and the team at Restoration Games have incorporated modern game design thinking with their pedigree in making award-winning games to make something entirely new and ambitious, now called Return to Dark Tower. In the original version of the game, the tower was a battery-operated bully, constantly harassing players with monsters and plagues to beat them down before they had enough power to confront the tower, defeat it, and win the game(think Oregon Trail on steroids). The new version takes this concept and brings it to an entirely new level. Like other games that Tim has worked on in the past, Return to Dark Tower will incorporate a smartphone interface to deliver an immersive experience for the players in the form of encounters, bonuses, pitfalls, and more, and will control the physical tower’s motors, light and sounds through Bluetooth connectivity.

In the original version of the game, the tower was a battery-operated bully, constantly harassing players with monsters and plagues to beat them down before they had enough power to confront the tower, defeat it, and win the game. (Think Oregon Trail on steroids). The new version takes this concept and brings it to an entirely new level. Like other games that Tim has worked on in the past, Return to Dark Tower will incorporate a smartphone interface to deliver an immersive experience for the players in the form of random encounters, bonuses, pitfalls, and more in conjunction with the tower itself through Bluetooth connectivity. 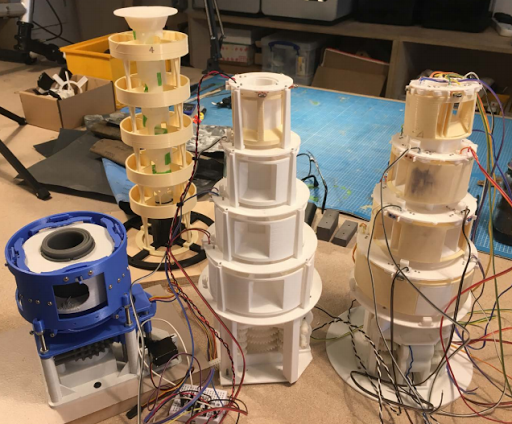 Tim worked with a small team of mechanical and electrical engineers to create an impressive homage to the original 1981 tower, whilst also ensuring that the new design stands on its own, becoming truly something to fear. At the time I spoke with Tim he estimated that the tower would have gone through ten complete revisions before actual manufacturing begins.

“There was really no other way to create the tower without 3D printing. From making custom enclosures for electronics to prototyping gears to designing the aesthetics of the external shell, the whole thing from top to bottom was made possible by 3D design and printing.” 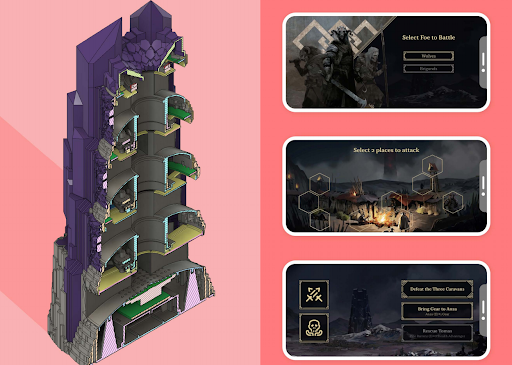 A 3D render of the Dark Tower, as well as concept screens for the mobile interface players use to interact with the tower itself.

Tim used a stable of Ultimaker 2 and Ultimaker 3 printers to produce the FDM pieces, also using a pair of Formlabs Form 2 SLA printers to create more intricate parts. With the Kickstarter raising over $4 million in January 2020, and the expected release date of the official game slated for Q1 of 2021, we are eagerly awaiting the final product created by Tim and his team of fellow designers, who are committed to bringing new and innovative gameplay experiences to the masses using the latest rapid prototyping techniques.

For more information on Tim and his projects, you can find his website here:

For more information on Return to Dark Tower, you can visit the Kickstarter page here, where at the time of publishing pre-orders are still open:

To learn more about Makerversity in London, visit their website here: