The ever-increasing range of applications for 3D printing spans many different industries and professions. For Stefan Ulrich, AKA RandomDesign, 3D printing has enabled him to create some truly epic computer case mods.

Originally from Germany, but currently living in Ann Arbor, Michigan, Stefan works full-time on commissioned projects making case mods, props and 3D printed costume pieces. His projects have included case mods that look like Poe Dameron’s X-Wing from the current Star Wars trilogy, the W.O.P.R. computer from the classic movie, WarGames, a life-sized Venom bust, and many more. Stefan has also designed and fabricated props and costumes for characters from Overwatch, Batman, Harry Potter, Alien, The Last of Us, and even the Grinch. Stefan has been earning awards for his designs since 2014, and he has grown a reputation as someone who pays attention to detail and makes reproductions that are very true to the source material.

In 2012, when the Ultimaker 2 and the Prusa i3 were released, it was Stefan’s first exposure to 3D printing, and the initial spark of creativity for using 3D printing was ignited. “I was still at the university when I started to realize my first creative projects and at that time, I initially became aware of 3D printing and the great opportunities it offers.”

But his start in case modding was only the beginning. “I started building case mods in 2014 and later expanded my business to include making props for costumes or small movie productions. With every project I’ve built so far, I try to include new materials and learn new techniques. After I got my first 3D printer, I mainly printed small detailed parts or parts that were just more difficult to make from other materials, such as wood or glass fiber. Working my way up from there, I have already completed multiple fully 3D printed case mods and props. It is also a great technique to produce masters that I then can use for mold making and casting. 3D printing just opens up huge possibilities for my work in both areas, case modding and prop making, and allows me to immediately realize all of the designs I made in 3D.” 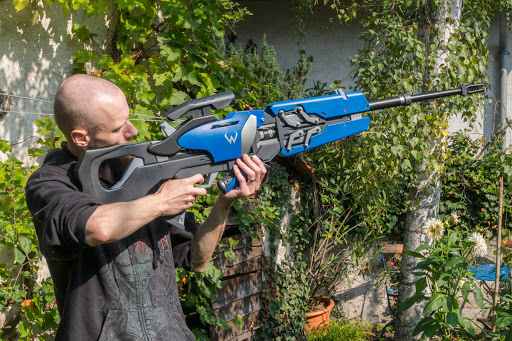 A screen-accurate Widowmaker rifle with LEDs and realistic moving parts.

While working on his master’s degree, Stefan was able to partner with 3DGence. “Partnering with 3DGence was really my starting point of diving into 3D printing. In 2018, I started a very fruitful collaboration with Sindoh 3DWOX who provided me with two of their printers as well as different types of filament. Since then, I realized several huge 3D printing projects, like the Venom bust and the Star Wars X-Wing which are almost completely 3D printed.”

Stefan primarily uses a Sindoh 3DWOX 2X and a Sindoh 3DWOX 1, which are fully-enclosed FDM 3D printers. This allows him to get consistent 3D prints using ABS filament. “Due to my partnership with Sindoh 3DWOX, I’m mainly using their filament. I’m printing a lot in PLA, but switching more and more to ABS because the post-processing is easier and faster compared to PLA prints. I so far haven’t felt the need for using other materials, like PETG, PEEK or nylon, but I definitely want to look more into resin printers for future projects.” 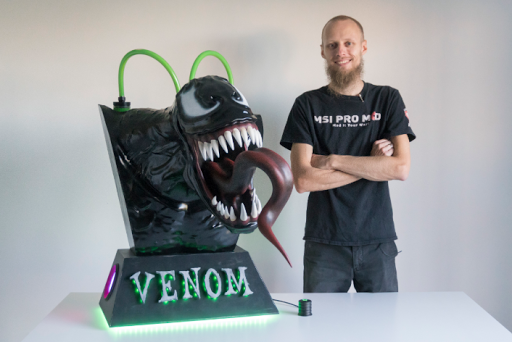 One of the overarching reasons Stefan’s designs are so successful is his extensive use of post-processing techniques. “All of my 3D printing projects are highly processed. My goal is always to make my pieces look like they were not 3D printed. I start with a basic sanding, followed by wet-sanding. After assembling individual pieces, all larger gaps are filled with two-part epoxy putty, sanded again, and covered with several thin layers of spray filler. After filling the remaining spots with spot putty, another round of wet-sanding follows. I repeat these two steps until the surface is smooth and perfectly even. Then, I start priming and painting.”

The devil is definitely in the details for Stefan. His attention to source material for his 3D prints, as well as his post-processing regimen, has garnered him over two dozen awards from several case-modding events and publications. His work in 3D printing has truly elevated his ability to get accurate models as he explains. “With the right settings and a perfect 3D model, 3D printing really can improve your project. For example, I built a tabletop-size replica of the WOPR from the 1983 movie WarGames and my first version was made of glass fiber and body filler. However, it was extremely difficult to meet the right angle for every corner and to achieve a perfectly even and smooth surface. Because I was totally unsatisfied with the original outcome, I decided to rebuild the entire case in 3D and print the individual parts. In this way, all angles and corners turned out exactly as they have been designed in my 3D model.” 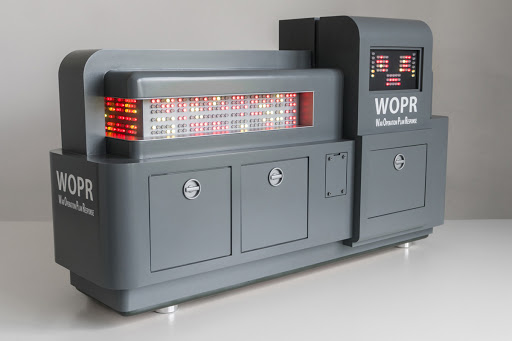 Stefan also sees 3D printing as an indispensable tool for his current and future projects. “3D printing mainly helps me to realize my ideas and crafting projects on any scale I want. 3D prints are also very light and that’s why 3D printing was also my method of choice when I was building my Hunter Warrior notebook in the style of this year’s Alita movie. Aside from that, I also use 3D printing sometimes to just print some useful items for my workshop such as fan ducts for my power tools or a fume hood for my soldering iron.”

“Since 2018, I’ve been making case mods and props professionally. For many of my client’s projects, I either use 3D printed parts or realize the whole work by 3D printing. 3D modeling and printing became very handy, especially when I’m asked to include certain functions into a prop. For example, I built for the Overwatch fan film “Lion’s Return” the guns of the characters Widowmaker and Tracer which were supposed to have the same functions as in the video game. So, I designed and tested the mechanisms in my 3D models and realized them by 3D printing.” 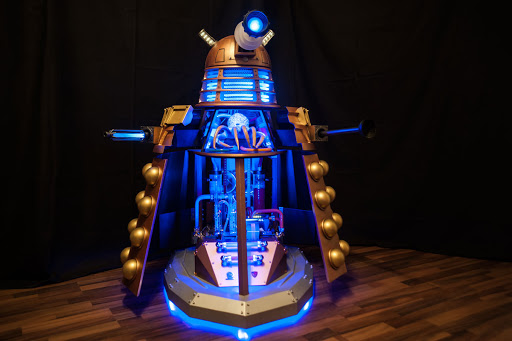 A remote-control, movable Dalek case-mod – complete with Dalek inside!

But where does Stefan see 3D printing going in the future for the regular user? “I think if someone wants to start with 3D printing now, it is quite convenient. There are more and more affordable printers on the market, both FDM and SLA. Websites like “Thingiverse” offer a huge selection of free 3D files for printing. If you also want to dive deeper into 3D printing and create your own 3D models, learning a 3D modeling software is no longer that difficult due to almost unlimited resources and tutorials online these days. And the best part for newcomers, most of them are for free.”

As for 3D printer functionality, Stefan voices many of the same wishes for standard features in the future; filament runout sensors, flexible build plates, print restore after power failure and wifi connectivity. Getting that ‘One’ 3D printer with all the bells and whistles would be a boon for beginner and advanced users alike.

Stefan incorporated the water-cooling system and the graphics card into the design of the X-Wing – the engines also hide the cooling fans!

The future seems to be very exciting for Stefan, as his journey into 3D modeling and design is really just beginning. “I always have multiple projects going on at the same time. I have just finished the WOPR and the Star Wars X-Wing case mod. Currently, I am working on the full body armor of Batman from the movie Batman vs Superman. In addition, I’m building some smaller props right now, like the C-10 rifle from the character Kerrigan from the game Starcraft 2. I’m also already in preparation for my next case mod, which will be another 3D designed and printed bust of an EVA-01 unite from the anime Neon Genesis Evangelion.”

We can’t wait to see what Stefan creates next, so be sure to stay updated on Stefan and his amazing projects by following @Random2k4design on all social media platforms.

You can also visit his website, which hosts numerous other galleries of some more incredible projects at www.randomdesign.org