We present a solution to the common problem of aligning multiple extruders on a standard desktop 3D printer. The majority of solutions for this task have involved the end user evaluating a printed result that has many ambiguities as to what is most aligned. We demonstrate that by printing a multitude of misaligned layer representations and asking the user to evaluate the visual results on the opposite sides of both the x and y axis, users can discern a much more accurate alignment and with less effort, less instruction and more efficiency. We also offer a reference implementation of the solution within the open source program MatterControl.

Calibrating the nozzle offsets for dual or multi material printing is a common and important step of setting up many desktop 3D printers. Variations in manufacturing often leave printers with subtle variances in the exact position of the extruding orifice of each nozzle tip and having them precisely aligned is fundamental to achieving good final results while printing.

Most printers do not have the ability to create an automatic calibration without the help of the end user. Therefore calibration procedures often take the form of:

The current most common method of dual extrusion printer calibration is to print a series of lines with one nozzle then to print a series of nearly collinear lines with the second nozzle. The user is then instructed to evaluate the printed result and enter data as to which lines represent the best calibration alignment. This approach has intrinsic ambiguities and is often confusing or results in unsatisfactory calibration.The root of these ambiguities is that it is hard to discern which of the candidate lines are most aligned. Filament differences, z-calibration (relative height) of the respective nozzles and the users perception of what represents the edge of each line, can all negatively affect the clarity as to which line to pick. The second ambiguity is, for printers that are significantly out of alignment, the printed result can have multiple areas that look to be correct but are more than one line separation (or phase) out of sync. Our solution corrects both of these problems while making the assessment required by the user significantly easier. 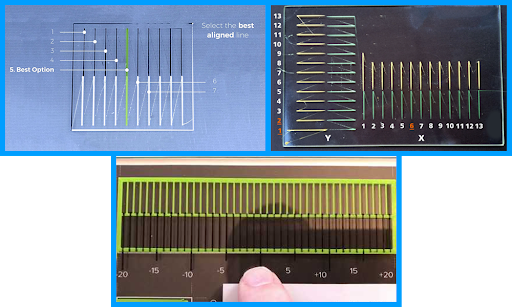 Overview of the Solution

Calibration is done as a two stage iterative process.

Over dozens of user studies this new process was shown to be significantly easier for users to understand and produced calibration results closer to the ground truth of the nozzle separation distance. Users had fewer questions during the calibration task, and the time to achieve acceptable calibration decreased from over an hour on average to under 30 minutes. Most importantly this new method does not require the user to understand any of the complexities of what is happening with phase, filament compression, filament adhesion, or the ambiguities of communicating visual alignment. The user is able to make a very easy judgement of the requested feature and calibration can be done from that data alone.