Our September Hacker of the Month, Oliver Vaughan-Jones, is an outdoor, snow-sports enthusiast that comes from a design engineering background in central Wales.

Oliver started his journey into 3D printing early – his father was a dentist who used 3D design and printing to recreate jaws and dental molds for his practice. Seeing the benefits of the technology early on, Oliver was already familiar with the concepts and applications of 3D printing when he enrolled in Brunel University in 2008 to study design engineering. Oliver also worked as a snowboard instructor and was very passionate about snow sports.

During his third year, the students were tasked with applying for jobs that were associated with their degree courses. Here, Oliver landed an opportunity working with Gillette’s research laboratory near London.

Some of Oliver’s sketched designs for the sit-ski

Oliver explains, “It was there, as concept engineers, we came up with ideas, designs and then used a range of 3D printers and stereolithography to create innovative concept razors. In fact, back in 2008, the research lab already had a department of four or five staff dedicated solely to taking the CAD files from the designers and making their prints for them – what luxury!”

But during his time at Gillette, Oliver became extremely ill and was diagnosed with myalgic encephalomyelitis (ME), a neurological spectrum condition that can affect people to varying degrees. Oliver was hit extremely hard by the condition, and he has spent the last eleven years bed-bound almost 90% of the time, and he often has difficulties with thinking and concentration. But Oliver is more than his condition – underneath everything, he is still a design engineer and a snow-sports enthusiast at heart, and he’s on a mission to make hitting the slopes a reality for others who share his love of the mountains.

Cardboard mock-ups of some sit-ski parts

Determined to make a difference for himself and others, Oliver started painting in 2017 to raise awareness of ME as well as funds – 20% of the sales of his paintings go to research into a cure for myalgic encephalomyelitis. Once his artwork gained some traction, he was able to move forward with his next goal: designing and creating a sit-ski; an adaptive device for those who can’t stand, but still have upper-torso mobility, that will enable them to shred on the slopes again.

Once he started, he discovered that most of the current equipment is extremely cumbersome and prohibitively expensive in many cases. He felt that he could do a better job at designing a lighter, more affordable sit-ski despite his condition.

A gallery of Oliver’s art to raise awareness for ME

So for the last eight months, Oliver has been designing an adaptive sit-ski from scratch, mostly from his bed. Oliver started with sketches to concept his design and quickly made life-size models for cardboard cutout fabricating. At the same time, he took to YouTube to learn how to use Fusion 360 so he could start to 3D print his cardboard concepts. Oliver’s main design goals are to develop a platform that has a more user-friendly price point, is more adaptive to more users, as well as more lightweight from a materials standpoint.

Oliver explains, “There are many considerations; rider weight, rider skill-level, ski-lift access, material selections, material thicknesses, and shock absorbers to name a few. The 3D printing is allowing me to model my ideas up quickly to see if the mechanics work and, more importantly, the ergonomics. For example, some people might be missing limbs or have structures like prosthetics that need to be accommodated. Dexterity is another major consideration; poor gripping strength is an issue for me and I need to include buttons or straps that are easy to locate and use. Like all design work, it is juggling many elements at the same time and trying to bring it in under budget. I have already modeled a full-scale prototype and I’m aiming for a fully functional prototype by November. However, the simple goal is to have something I can ride on! I’m outpriced to buy a ski outright and rentals are not possible. This is a passion project for me and I can’t wait to ride this winter!”

Oliver is currently working with a Creality CR10S Pro and a Flashforge Dreamer to create his 3D prototypes. Oliver gained valuable insight into everything from bed leveling, changing the belts, the nozzle, the hotend and many other facets of 3D printing using the CR10S. However, his favorite printer is the Flashforge Dreamer, as it has been incredibly consistent with almost every material he’s thrown at it from PLA to ABS and nylon. He also uses simplify3D as his slicer as it gives great control over slice settings and includes a wide selection of compatible printer profiles. Right now, he is searching for a stable 3D printer with a larger bed to accommodate the larger print volume he will need for some of his prototype parts. His overarching goal, once his prototypes have been tested, is to fabricate usable parts with NylonX for extreme strength and durability.

A traditional sit-ski in action

Like all designers, Oliver hopes that 3D printers and materials will continue to come down in price to make more complex applications available and affordable for everyone. “I’m well aware of how very new I am to 3D printing and I don’t have great knowledge or experience in it beyond the domestic sub-$1000 range as far as machinery goes. It does still feel like much more of an art form rather than a science to me. I imagine domestic printers of the future to take over the laborious tasks of accurate automatic self-leveling, nozzle cleaning and to have better sensors so when things start to go wrong, they can self-regulate. I think we’re going to see larger print volumes come onto the market imminently and having just been sent a sample from a metal 3D printer, I can see the future in multiple material printing with different materials being printed within one print (complexities like shrinkage rates for each material calculated beforehand). Beyond that, I imagine one of the next major leaps will be some sort of printed circuitry which will be integral as part of the design.”

We are extremely excited to see the completed sit-ski that Oliver is designing, and we hope that the use of NylonX in the design makes it the most rugged sit-ski on the market!

If you’re interested in learning more about Oliver and his projects and paintings, you can visit the following websites: 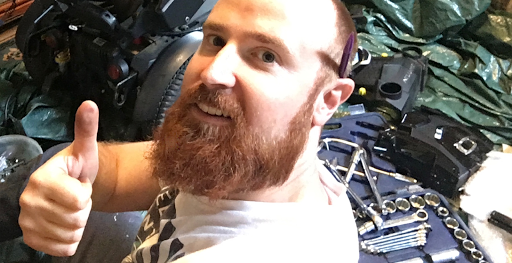 Oliver hard at work on his fabrication of the sit-ski