The Mosquito Hotend is not like any hotend you’ve seen before. If you’ve ever had a hotend leak filament out of the heater block, struggled with both hands to remove a nozzle while the hotend is hot, or broken a heat break because you twisted too hard, then you know what Chris and Dan from Slice Engineering are talking about. After experiencing that frustrating process of swapping nozzles on the most common hotends found on most 3D printers, Chris and Dan decided to do something about it.

Following the “form follows function” mantra, they designed the Mosquito from the ground up to address some of the most frustrating issues that more conventional hotends face.

The Mosquito doesn’t have this problem. Instead of a single, structural heat break, the Mosquito has 4 thin-walled stainless steel surgical tubes on the corners of the heat block, and a non-load bearing heat break. Because the heat break is not load bearing, it can be much thinner than a conventional heat break that must support the heater block, nozzle, heater cartridge, thermistor, and the forces that are acting on a hotend. This is excellent for hotend performance. It allows for a very steep temperature transition between the heat break and the melt zone. 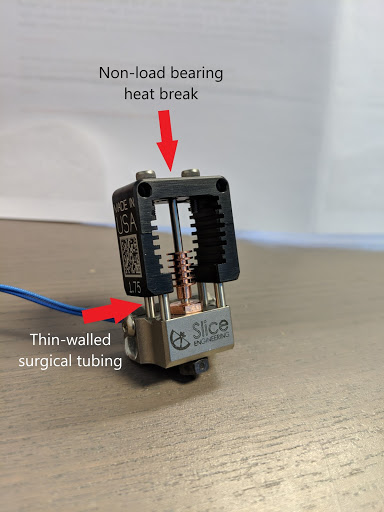 This thin-walled heat break is a key factor to the performance of the Mosquito. And by thin, we mean really thin… 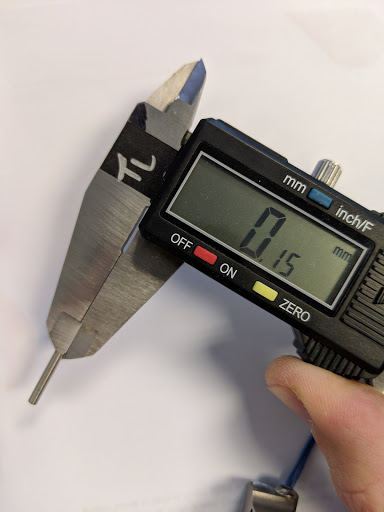 A typical heat break has a wall thickness around 3mm. The Mosquito is about 20 times thinner than a standard heat break! This means that significantly less heat travels up the heat break, which, in turn, reduces the need for a large heat sink. Less cooling demand also means you can use a smaller fan. The Mosquito only needs a tiny 25mm fan to keep it cool as opposed to the standard 35mm or 40mm fans found on most hotends. This makes the whole hotend assembly more compact, and it runs quieter.

Slice Engineering states that their heat break conducts 85% less heat into the heat sink than a conventionally threaded heat sink. Instead of a large, cylindrical aluminum heat sink, the Mosquito has a small copper heat sink that is jacketed over the heat break tube near the heater block. Copper is nearly twice as thermally conductive as aluminum, so it transfers heat better and you need less of it to get the same cooling performance as an aluminum heat sink.

This is a thermal imaging capture showing the very steep thermal gradient of the Mosquito. This is excellent for a hotend! 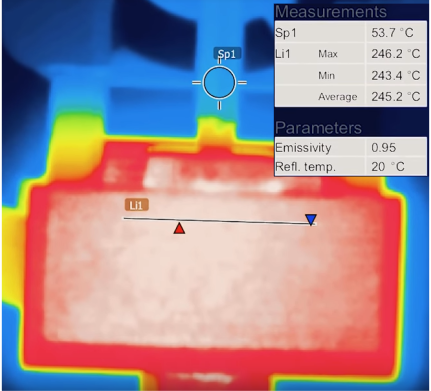 This material selection was no accident. Rather than just choosing the cheapest material available, each material on the Mosquito was chosen for a specific purpose. Slice Engineering states that material selection was at the heart of their design process. This brings us to the heater block. Standard heater blocks are aluminum which softens and deforms easily at temperatures above 290C°. The Mosquito has a copper alloy heater block that they claim will not soften at temperatures above 550C°. We didn’t test it up to 550C°, but we did heat it up to 400C° and change nozzles a few times – both with brass and hardened steel nozzles. We saw no thread deformation or any signs of wear that are common for conventional heater blocks at that temperature.

For those who have struggled with changing a nozzle, this will probably be your favorite feature.

No more holding the heater block with one wrench and trying to tighten/loosen the nozzle with another. The Mosquito makes one-handed nozzle changes possible. Also, because of the material selection and the design of the heat break and heater block, there’s no need to heat up the Mosquito to tighten the nozzle.

Don’t try this with other hot ends unless you want a broken heat break or a heater block that’s flooded with filament.

If you’ve ever had trouble pulling PLA filament out of your hot end because of the ‘bulb’ of filament at the end, then you are familiar with filament swell.

The unique heat break on the Mosquito doesn’t just have excellent thermal properties. The precision tubing has much tighter tolerances than PTFE tubing. PTFE tubes can often have an internal diameter exceeding 2.1mm. With PTFE tubing, your 1.75mm filament has room to swell 20+%. Not so with the Mosquito. The tight tolerance of the heat break that extends all the way to the top of the heat sink ensures that your filament cools and doesn’t swell enough to cause issues with your filament path.

With the cutting-edge design that Slice Engineering has incorporated into the new Mosquito hotend, there are a lot of great reasons to upgrade your 3D printer with one. From the ease of use to changing nozzles quickly, to the low rate of heat creep and the consistency of the target temperature in your hotend; all of these advantages give you more accuracy in controlling the flow of filament deposited on the print, giving you better prints and lower failure rates.