A strong indicator that the power 3D printing has to fuel growth in the maker community is finding it being put to use far and wide in niche groups of fellow artisans. This is the case with Aura and David Welsh – denizens of central California. They have discovered and cultivated the use of 3D printing, to enhance their craft, accept more commission work, and create new and exciting parts and accessories for their Ball Joint Dolls (BJD’s).

An amazing world of makers just outside the mainstream, the Ball Joint Doll community creates a huge variety of dolls that have ball-joints; simple ball and joint snap joint at the elbows, knees, neck and anywhere else a doll would need articulation to move. The types of BJDs can run the gamut; animalistic, gothic, super-cute, anime, fantasy, punk, couture fashion and everything in between – the possibilities are endless.

Aura and David started their 3D printing journey back in 2015, shortly after their daughter was born. With an already impressive print farm collection accrued in their short time, they use FDM machines like the Prusa i3, Monoprice Delta, Monoprice Select Mini, and their most recent acquisition, a Peopoly Moai SLA resin 3D printer. Aura personally started down the path into the BJD world when a friend asked for help painting a doll – as Aura had previously worked on painting sculptures. She ended up ordering her first doll before she finished painting the one for her friend! 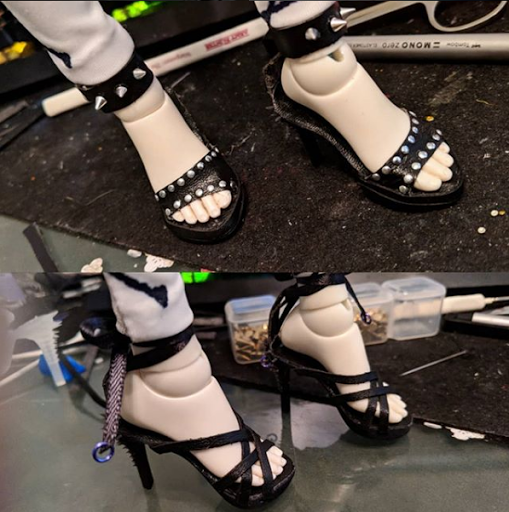 While they do occasionally use their 3D printers for things around the house like baby gate parts, drain covers, toothbrush stands and more, they primarily use them for their personal and commissioned work with Ball Joint Dolls. They use a small selection of materials for their BJD creations; PLA, sometimes carbon-fiber PETG, normal PETG and very rarely ABS. They have also used woodfill for a few select projects.

Finishing their 3D prints depends on what the end application for the piece will be. PLA and PETG prints, if they absolutely need to be finished, will get a few rounds of sanding with primer afterward, or they are left as is. With SLA prints from their Peopoly Moai, the parts get a soak in isopropyl alcohol for 1-3 hours to loosen the supports enough that they peel away and leave little to no marks or pits. Afterward, the resin prints get a coat of primer and sanding or very, very light wet-sanding with 1500 or 2000 grit, then a finishing coat of primer. 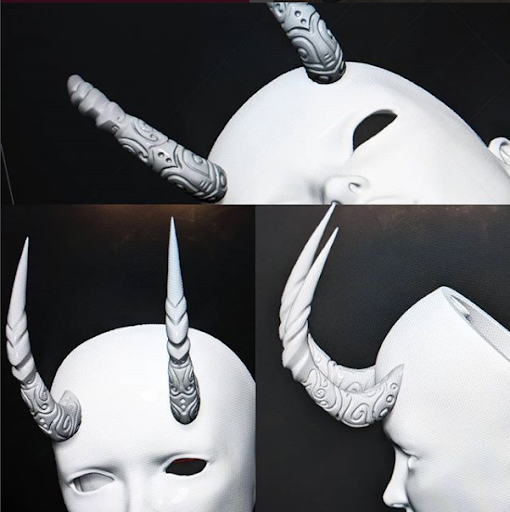 Aura uses primarily zBrush to design and model her parts but will use Fusion360 and 3DBuilder when the need arises. David uses Fusion360 almost exclusively.

With the last three years of experience designing and creating new and exciting parts and accessories for BJDs, Aura and David have become well known in their local BJD community for their knowledge and expertise. Recently, they were asked to give two talks on BJDs and the application of 3D printing in their workflow at the Resin Rose BJD Expo in Clackamas, Oregon. 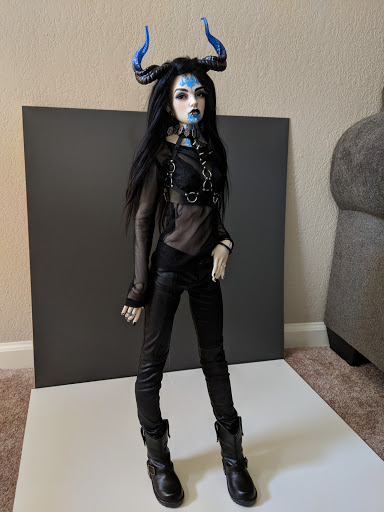 At the Resin Rose Expo, Aura and David were able to showcase how 3D printing has really elevated their involvement in the BJD community. Without the possibility of 3D printing, both David and Aura were becoming a little stuck creatively – but being able to develop shoes, doll-scaled weapons and more became extremely fun and rewarding – both personally and professionally. They have been able to expand the product lines they regularly sell, as well as take on commissions they normally would not have been able to in the past. They report that the BJD community as a whole is starting to utilize 3D printing in whole or in part to create their dolls, doll parts, and accessories as well. 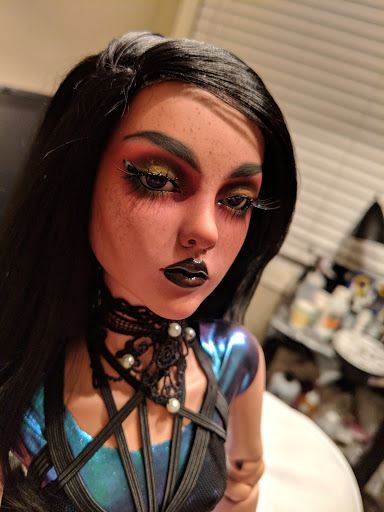 Israfel, another of Aura’s award-winning models

Aura has also been able to capture some awards for her BJD work with her doll Abaddon and Israfel – she won first place for the Faceup competitions they were entered in! Aura describes her creations as having a goth/supernatural vibe with punk (cyber and normal!) and fantasy a close second.

With all of the new possibilities available to them, as well as their community, they also see much more room for exposure and understanding of 3D printing. 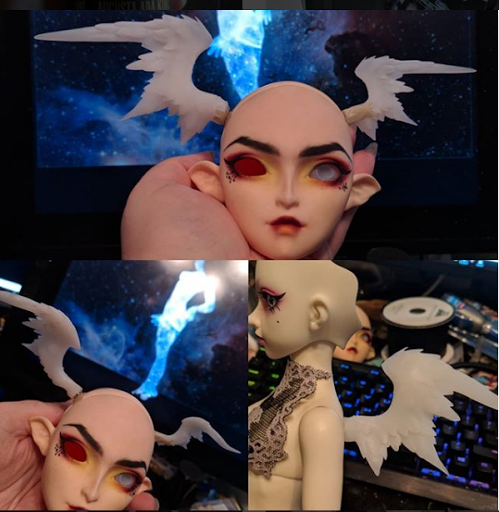 Like many other makers in the 3D printing community, Aura is calling for improvements in the education of students for, “..earlier access and exposure (to 3D printing). Schools having access to printers, or even more access to programs like CAD or Zbrush would do wonders to help expose newer generations to these tools getting them excited about them sooner. I’d like to see it become even more accessible and widely used, especially by women and girls.”

In that same regard, Aura’s daughter is already helping with her 3D printed BJD creations. She recently named a new Halloween project doll called ‘Pumpkee’; he will have a removable lid, ball-socket feet, and ten different faces! David is building an RGB LED rig using Adafruit Pixel nanos so Pumpkee can light up and be festive! He’ll be their first full in-house printed doll. They will also be debuting a full human doll within the next year! 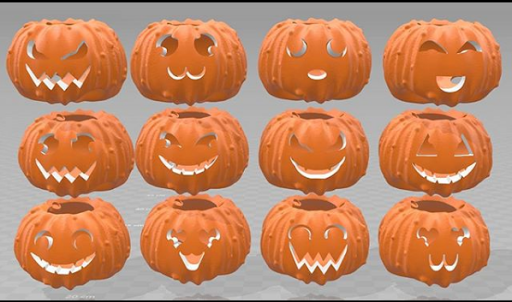 We look forward to seeing more and more 3D printing creations from Aura and David, as well as the BJD community at large!

If you would like to learn more about Aura and David and their work, you can visit the links below:

Do you or someone you know do amazing things with 3D printing? We’d love to share your story! Send an email with your story to chris.morgan@matterhackers.com and you may be featured in an upcoming MatterHackers Minute!