Garrett Faulkner, our July Hacker of the month, is a Digital Fabrication Specialist and Architectural Model Maker for Faulkner Industrial, where he makes designs come to life with the use of 3D printing.

While earning a Bachelor’s degree in Industrial Design from San Francisco State University, Faulkner enrolled in a rapid prototyping class which focused on 3D printing and CNC milling. “I started at a 3D Printing service bureau in San Francisco where I worked extensively with architects and industrial designers to produce models using 3D printing technology,” said Faulkner, “I learned file preparation for output into 3D printing, which is the most difficult part of the process, as architects do not prepare digital models for 3D printing.  I worked with the infamous ProJet 860.  Though a headache to deal with, the ProJet gave me a massive amount of experience in troubleshooting and working with complex machinery.”

Faulkner has since moved to the more reliable Ultimaker 2 Extended which has been upgraded to a 2+. In order for Faulkner to get the best prints possible, some assembly is required: “In architectural models, there are a lot of overhangs and floors of buildings that would normally cause sagging.  On the software side of things, I split pieces into multiple prints in order to achieve the cleanest possible end result, then glue floors and roofs together.  Sometimes the roof is left unglued so that the client can peek inside each room,” he explains. 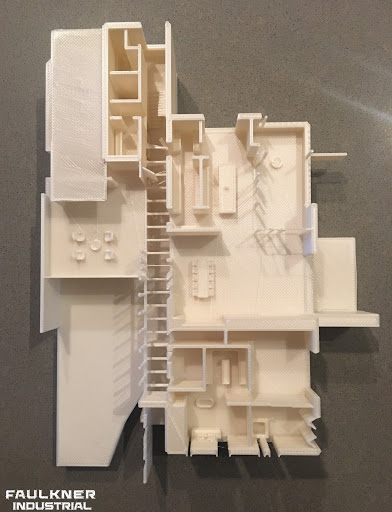 3D printing has changed the way architects use models, especially when it comes to time and cost. “Classic balsa wood and cork models take weeks to produce and are very expensive. They’re generally used when the design has been finalized,” stated Faulkner, adding that, “my dad, Greg, wanted form studies along the way so he could see his designs and hold them throughout the process, figuring out what works, what doesn’t, and what could push the design even further. Through 3D printing, I can have a new model for form study in front of the architect in days at a fraction of the cost. Iteration and design development has been pushed further than ever before.” 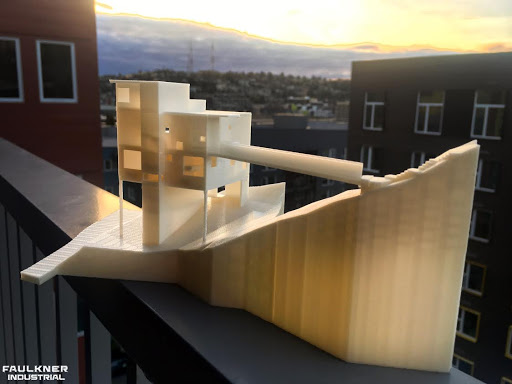 Not only is time and money saved thanks to the 3D printing process, but it also provides a more sustainable way for architects and clients to work closely to meet a mutual end goal. “Since 3D printed models can be made much faster than classic architectural models, they can be incorporated into various stages of the design process, making it more involved and hands-on for the client, which ultimately contributes to a more comprehensive final design from the architect,” said Faulkner.

Before starting Faulkner Industrial to spread his services to a broader area, Faulkner worked (and still does) for his father’s architectural design firm, Faulkner Architects. His father, Greg, who is the Principal Architect at Faulkner Architects agrees that 3D printing and the work that Faulkner does has changed the design process for the better: “The 3D prints generated by Garrett [Faulkner] have transformed the way we think about architectural models in our Architectural practice,” states Greg, continuing that, “historically, models were cumbersome affairs taking weeks and weeks to build out of wood- and they were really interpretations of the design not really reproducible in wood. The models are now exact representations of the design and in days or a week from ordering. That changes everything, now we can experiment at early stages in the design process without worrying about the investment of time and money in an early scheme. We used to build one model, maybe two of a project. Now it is 4 or more and that number is growing. Even after completion, months later, we still go back to the models, place them accurately in terms of true north to check for light in a particular design.” 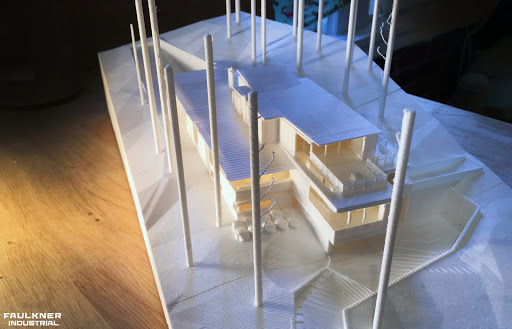 Because of his success with 3D printing, Faulkner plans to grow his printing company by adding more printers. He is in the process of moving to Kansas City in hopes to broaden his clientele while continuing to provide services for Faulkner Architects: “The coolest part about this day and age is that you don’t have to be physically in the office to work directly with architects and engineers,” said Faulkner.

As for the future of 3D printing, Faulkner hopes to see the technology become more accessible to a broader population. “Desktop 3D printers still require a fair amount of attention and knowledge to operate, maintain, and produce good-looking models,” stated Faulkner, “to make the process accessible to the masses is to make printers more reliable and easier to use.” 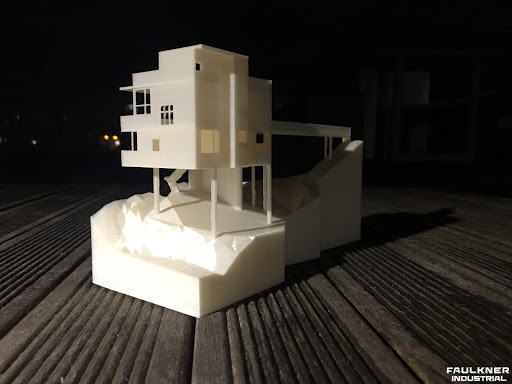