Cal Poly Pomona’s Human Powered Vehicle team is a club that designs and builds a recumbent bicycle and competes with it against other colleges. This year, we made a “tadpole” which uses two front wheels and one rear wheel. We used 3d printing to build critical components of the bike.

As with any vehicle, getting the correct geometry is critical for good handling. This year we used a new method of fixing tubes in place for tack welding. We modeled 3d printable tube fixtures in solid works to hold the tubes at the perfect angles. Their baseplates were square, so we could use a straight edge to align them with other jigs and the tubes themselves. They were printed in ABS filament since it has a high glass temperature. With ABS, there is a high chance of warping, so the fixtures were also designed to have holes in the vertical supports to minimize warping. 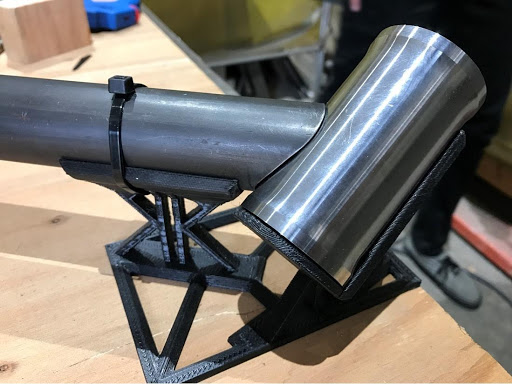 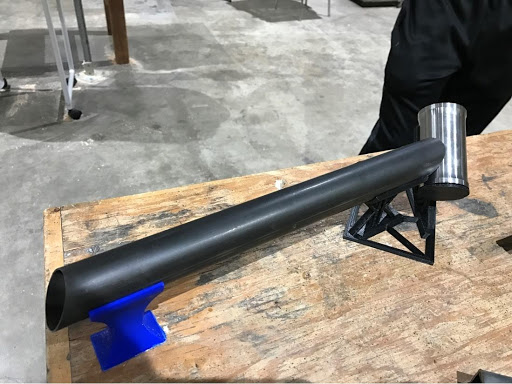 Since the parts didn’t have to look pretty, they were printed with a 0.8mm nozzle at 0.4mm layer heights. The fat extrusion width also gave the part a lot of thermal mass, which helped when tack welding the tubes in the fixtures. The jigs didn’t melt at all. All our parts were printed on a heavily modified Kossel Pro 3D Printer with a temperature controlled heated chamber, an e3d v6 HotEnd mounted to an end effector that I designed, and controlled by and Azteeg x5 mini v3. 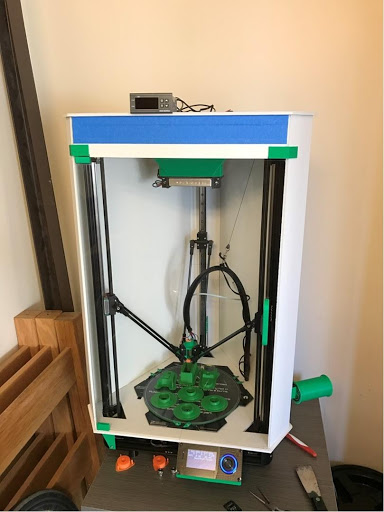 Another place we used 3d printing on the bike was in our chain routing system. This is often a huge problem for recumbent bikes, because the chain is extremely long, having to go from the front of the bike where the pedals are, to the rear wheel. After going to a couple of competitions, we’ve seen a lot of other teams have problems with chain management. Often the chain becomes too slack and comes off the pulleys or gears. 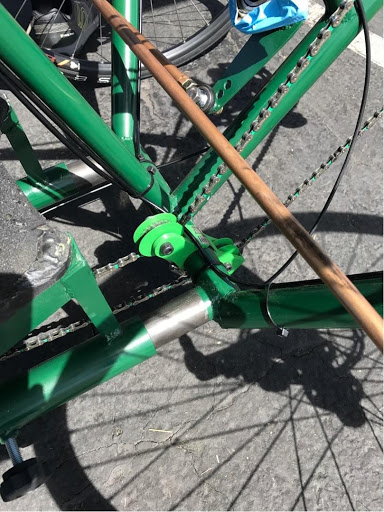 We knew we had to come up with a reliable system, so we designed and 3D printed our own pulleys out of MatterHackers PRO Series Nylon. We used green nylon from their colorful selection to match our bike. We went through a couple of iterations to find the optimal design that mounted to the bike cleanly, had enough strength, and was easily printable without supports. In addition to pulleys, we designed and made a chain guide, that kept the chain from coming off the crankset. Nylon was a perfect material for this because of its low coefficient of friction. Whenever the chain touched the chain guide, it would slide easily. It paid off because we haven’t had a single derailment of the chain. Although the pulleys showed wear after the event, they survived the high pedaling forces. 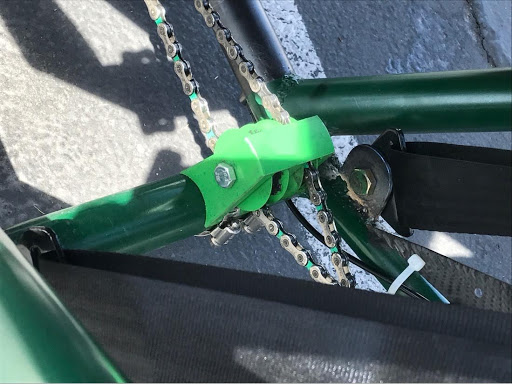 This year the competition was in Las Vegas, Nevada. There is a design presentation, a speed competition around a short course, and a two-and-a-half-hour endurance event. Our team continued to rise in rankings, placing 10th out of 25 teams. A highlight for us was placing 4th in the endurance event. This is a very difficult race for most teams since it tests the performance, reliability, and ease of use of the vehicle.

Next year, we plan on iterating on our tadpole design and improve the manufacturing of the frame with more 3d printed fixtures and an even better chain management system.