It would be an understatement to say that Michael O’Brien likes cars. Take one look at his Instagram, and you’ll see what I mean. He’s fully immersed in the automotive industry; being lead engineer at the Roadster Shop, I’d imagine that you’d have to be.

When we discovered that O’Brien (aka Magic Mike) was using 3D printing to help design and manufacture custom accessories for cars, we knew he had to be featured as our December Hacker of the Month.

O’Brien was introduced to 3D printing while attending Iowa State University, where he had the opportunity to interact with early FDM machines for rapid prototyping and part development. He recently purchased a LulzBot Mini for his personal projects, which has helped advance the visions he has for his designs. “Solid modeling has evolved into such a great tool and community over the years,” said O’Brien, “but the revolution in affordable and available 3D printing has finally allowed me to take complex parts I design that would normally be difficult and costly to produce, and make them a realistic final product with great quality and access.” 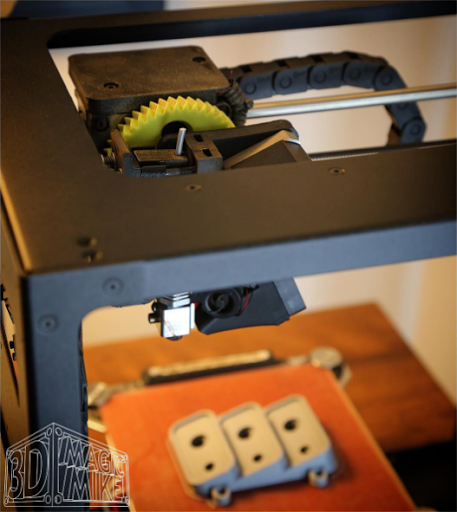 Printing away on the LulzBot Mini

O’Brien is currently working on parts and components for his Datsun 620 project, and you can follow the progress here. “For both my own work and our work at The Roadster Shop, 3D printing has allowed us to step out of the traditional manufacturing methods and design parts and products at a considerably faster and more complex level,” he explains.

Many of the parts that O’Brien designs and prints are vehicle components that cannot be found or are very expensive to replicate, so with the help of 3D printing and Solidworks, he is able recreate iconic features for classic cars. “It’s easy to design a crazy complex component if you have the experience, but most would agree that actually taking the digital vision and making a physical component is always the hardest part,” he states, adding that, “3D printing really allows me to express my creativity and let my designs show in the physical realm, allowing a lot of boundaries to be removed from traditional manufacturing design.” 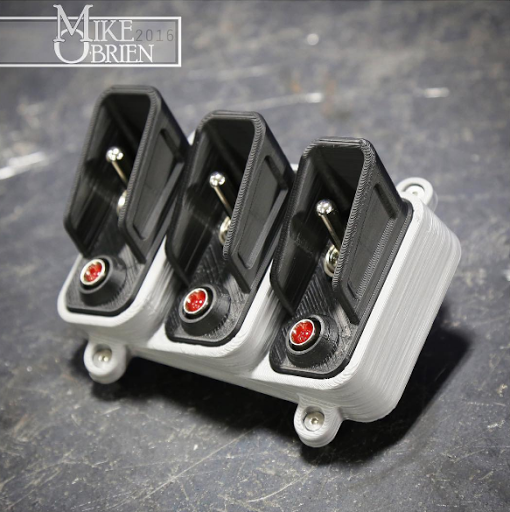 O’Brien primarily uses HIPS filament as his go-to material. “I have found that it’s warping and delaminating properties are the best I have used,” explains O’Brien, adding that “ABS filament would be a close second, for those parts that require the strength and end-use properties on a part that will be used in automotive applications. I also use T-Glase for any clear part designs.”

When I think clear T-Glase and cars, my mind immediately goes to headlights and tail lights, which is apparently what O’Brien has been experimenting with. “The nice thing about printing with T-Glase for lighting is that the internal layering effects of the print act as diffusion material,” he explains, clarifying that “when designing lights (especially tail lights), it is important to include diffusing designs and shapes with lots of angle changing facets to help spread and scatter the light into a not-concentrated bloom of light, and the internal ridge lines and “imperfections” left from 3D printing the clear materials do a good job of this.”

He used this same design element for the illuminated rings around his Datsun 620’s switch legend plates, which you can see below. “Since I was using LED lamps that have a very concentrated and narrow light beam, I used the raw T-Glase printed rings with their ridge lines help diffuse and scatter the LED light to a more uniform glow,” said O’Brien.

I asked O’Brien if he had any finishing techniques for his prints that are used beyond prototyping, and that actually make it on a car – he’s already a 3D printing purist: “for me, the terracing and layering effects left on 3D prints are part of the fun of 3D prints. In a nerdy way, it shows people that the part is indeed 3D printed, and I think showcasing the natural tool-path lines and layers from the part speaks volumes to the quality of the printer and materials used, so generally I do not post-finish many of my parts.” O’Brien is a true maker showcasing every medium used to create his Datsun 620 build. 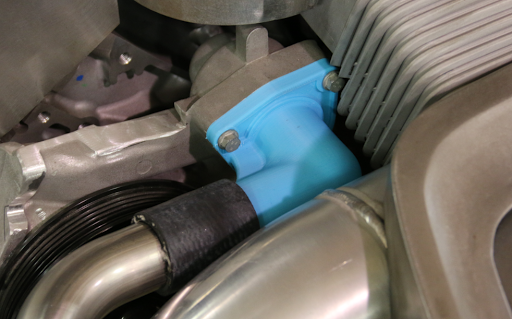 Part on the Inferno 1969 Camaro designed by Chris Grey.

Currently, O’Brien has roughly fifty 3D printed components on his Datsun 620 build. “I would expect the number of printed parts in the final truck to be in the couple hundreds at least,” exclaims O’Brien, explaining that, “wiring harness ends, bulkheads, and clips and clamps to hold things into place will be used – emblems all around the truck, door handle bezels, tail lights and housings, mirror bases and stems, fuse holders, fuel and brake plumbing clamps and holders….. there are so many ideas running through my head that I know 3D printing is the answer for!”

Check out more of O’Brien and the Roadster Shop’s projects on their site and his Instagram. Below are some photos of the Roadster Shop’s most recent build: the Inferno 1969 Camaro, which recently took the Goodguys Rod & Custom Association ‘Gold’ Award at the The SEMA Show. 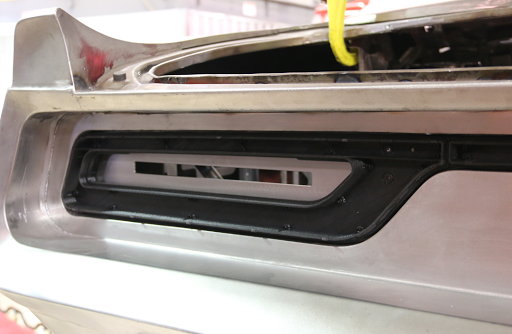 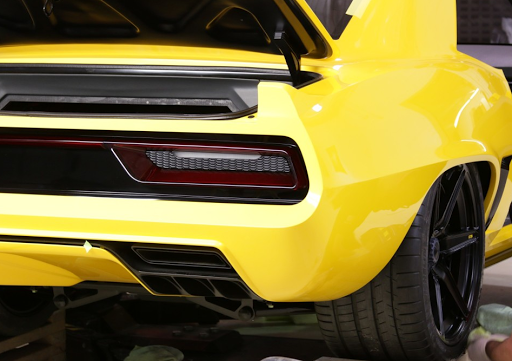 The Inferno 1969 Camaro in all it’s glory