For the most part, we all know that you can make some really cool stuff thanks to 3D printing. Anthony Williams, our April Hacker of the Month, makes cool stuff and takes it to the next level by creating awesome videos during his design, printing, and building process. His most recent endeavor: a working mechanical Terminator hand replica.

Video of the assembly and control of the Terminator hand

Williams, a 3D animator and modeler from Johannesburg, South Africa, first heard about 3D printing in the early 90’s and dreamed of owning one ever since. With improvements in the technology that now dominates most of our lives, and the fact that 3D printers are more affordable than ever, he decided it was time to invest in one. Just over a year ago, he purchased the Ultimaker 2.

“As a maker and inventor, I always wanted to be able to hold my 3D creations as I do with woodwork or metalwork, so it seemed logical to own a 3D printer,” explained Williams, adding that, “when it arrived, it was the unboxing of a new set of skills.”

Printing away on the Ultimaker 2

“People said 3D printing was slow, but something that would have taken me hours or days to craft by hand was now appearing in front of my eyes in minutes! People also say, ‘Ah yes, but it’s just plastic and brittle,’ but my answer is, does it matter? It’s a prototype, don’t be too fussy, you can make a mold and make hundreds if you want. One other misconception I had was that 3D printers are small, so what can you really make? Most things we use in daily life are small enough to fit in your hand. Many things are made of many small parts, so I learned that size is not really an issue.” 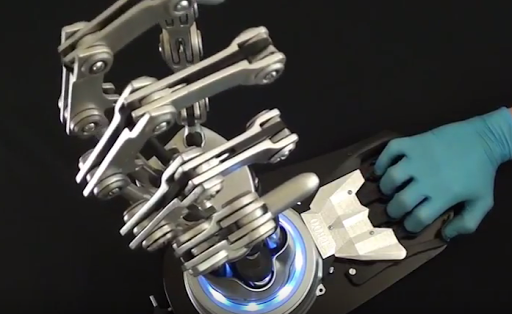 Terminator hand being controlled by a single wire

Not only is his above answer to 3D printing criticism the perfect justification, his mechanical Terminator hand replica is solid proof that anything is possible with 3D printing.

He had been wanting to build a Terminator hand since he first saw the original movie. Williams is a big fan of 70’s, 80’s, and 90’s movie prop designers. “In the early 90’s, I tried to make a steel version by hand that could be used as an arm extension for turning hot coals. The result is pretty ugly and heavy, so I shelved the idea,” said Williams, “but after getting my 3D printer, I realized it was possible to build it properly, using a similar lever method to what they used in the first movie.”

“I decided that it must be a working mechanical replica, and the fingers should open and close using only five strings, which could be operated by the user via a base control system , or via a lever in a future e-NABLE design that I will be working on,” said Williams. 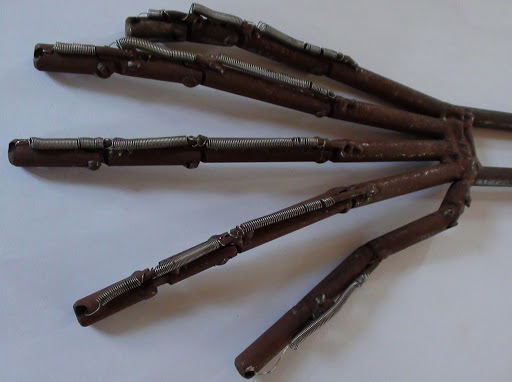 The early 90’s attempt of the hand made of steel

By using levers, all joints on the fingers move evenly, and open and close with a single wire. In the closed position, the fingers “lock” due to the leverage angles, thus granting it to carry loads with very little effort. “The next step is to improve and strengthen the design and share it with the e-Nable community,” stated Williams. The Terminator hand and mechanics would definitely be an excellent (and welcome) addition to the e-NABLE fleet.

Video of the design process

Williams used ABS filament to make the printed components of the hand because it is strong and you can use acetone to do some post-processing finishing. “I used ABS so that I could solvent weld the pieces easily using acetone,” he explained, adding that “acetone can also be painted on in a thin layer after a light sanding to weld the surface layers and achieve a nice glossy finish. The trick is to not use too much, and to let it dry thoroughly between layers. I only paint it once or twice max.”

“My 3D printer literally helps me daily,” raved Williams, “it’s brilliant for things like key-rings, gate remote covers or figurines, but also for very useful things like adjustable reflectors I designed to “zig zag” my security sensor beam around my house, or bubble & valve systems for my pond, or a pool broom connector for my sister.” Williams clearly knows that the potential uses of a 3D printer are unlimited.

“In my opinion, 3D printers are an essential tool for any 3D artist or designer. New software and tools are making it easier for anyone with little or no 3D knowledge to start creating, so I would love it if every child was taught a basic 3D program and given access to a printer,” said Williams. We definitely agree.

To check out more of Williams’ cool projects, visit his YouTube channel Ants in Africa.