Like many of you, what brought me to 3D printing was the ‘cool factor’ – being able to create things out of nothing but a model and what looked like colored trimmer string. I started my journey over 3 years ago now, and at the time I was googly eyed by the impressive prints that people were making, and found it truly amazing that I could make a butterfly, a Christmas tree topper and a minion (my first two prints ever) right in my living room, out of plastic! I was looking forward to the direction that this new hobby may take me, but I would have never guessed where it would go.

What direction did I go you may ask? Instead of looking at the cool knickknacks I can clutter my shelves with, I started looking at what practical problems I can use my printer to solve. I like to solve problems, it is just in my nature, and at the time there were some life changing events happening that really forced me to look at what 3D printing could do. My youngest son Tanner, who is now 5, suffers from several disabilities, and at the time we were really not getting many answers. He was diagnosed with Spina Bifida, a genetic disorder, before he was born (see http://spinabifidaassociation.org/ for more information). If that was not enough, he was also diagnosed with another genetic disorder, DiGeorge Syndrome. It all boils down to Tanner having issues with muscle movement and control of his lower body as well as suffering from significant issues with learning and speech. Tanner is a very unique boy, and in fact he is so unique that his genetic counselors (yes, plural, he has had 2 because of how unique his case is) have said there is no record in their genetic databases of another child with his specific set of genetic deletions.

Being a parent, I want my kids to have the best life they can, and nobody really had the crystal ball that would tell us what Tanners’ future would hold. At the time, we knew he may not be able to walk, and he may not be able to talk. He was able to learn, that was evident, but he couldn’t tell us what his needs or wants were. He was in several programs which included multiple types of therapies, multiple times a week, and while he was making progress he was still falling behind. There were no answers the doctors could give us, so we took each challenge one at a time and worked with what we knew and what we could do for him.

Communication was one of the first challenges that we were able to use 3D printing to help solve. Tanner was communicating with us by pointing at what he needed and grunting, but he couldn’t tell us. He was learning some sign language, but his therapists at his school thought he could do more than that. Tanner is a quick learner, but he couldn’t express himself verbally. As an experiment, his speech therapist let him use an iPad at the school with special software to see if he could adapt to communication that way. The software shows icons in various customizable groupings, and he could select the images which the iPad would verbalize for him. It was amazing seeing him communicate with us the first time using that software! Unfortunately, it lead to some other challenges. To address his mobility needs, he was fitted with a wheelchair (in of itself very helpful at the time) but he was not strong enough or coordinated enough to hold an iPad as well as operate it. Wheelchair mounts existed, but are expensive for what they are. His therapists at the school were kind enough to let us use one temporarily that they had and liked, which bolted right onto his chair. It made a world of difference! It was really a pretty simple apparatus, a plate and a mount with a goose-neck in between, so I thought I would give it a shot. I had no modeling experience at the time, and thought this would be a perfect way for me to learn. So, I fired up Fusion360 and modeled the plate and the base. I ordered a goose-neck for a microphone, put that in between the parts, and like magic Tanner had his own customized iPad mount. It even matched the color of his wheelchair!

He used the mount the rest of the school year and summer, and it made it much easier for him to communicate (and saved the iPad from being dropped repeatedly). Seeing his progress with it really helped me see the impact 3D printing could have one someone’s life, and gave me a purpose. I wanted to see what else 3D printing could do to improve my sons’ life! Not only for Tanner, but the other children in this world that have disabilities.

Walking was the next challenge. We wanted to get him out of that wheelchair, and there was no medical reason they could find why he couldn’t walk. It was thought that perhaps he wasn’t ready for walking mentally, but we needed to start trying to get him to walk. No matter what we were doing in therapies or at home, it just wasn’t grasping the concept, and we weren’t sure if he would ever walk. After consulting his medical team, it was decided to start off with ankle foot orthosis (AFOs), which are thermoplastic forms that fit around the back of his leg, and run from his calf down under his foot. The idea was to limit some of his mobility in hopes that he would be able to master the movement that was left to him to be able to stand, then walk.

Just by chance while at swimming lessons for my oldest son did we run into Carole, who is an instructor for a program called Adaptive Aquatics. This program specializes in helping children with special needs with movement and mobility issues as well as building their confidence. We were not sure how Tanner would take to being in water, but we tried a couple lessons to see how well he would do. While floating in the water using a specialized float, the team was able to get him to kick his legs and move his arms, and make walking movements with his legs. It was amazing! Finally, progress after so long! We enrolled him at that point, and the team quickly moved him from simply floating in the water to walking on a bench in the water to reduce his weight. He seemed to do well with it, but it was hard for Carole and her team to do this with him. The bench required two people to operate when Tanner was walking on it as he had no balance and the bench system had no rails except on the far ends. In talking with Carole, a plan was hatched, and my next practical 3D printing project began! 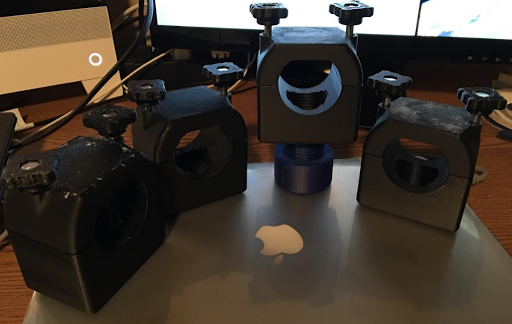 Some prototypes for Tanner’s bench

The bench is no more than PVC pipe with a flat surface, and end rails along the narrow sides. A solution needed to be created for the longer sides of the bench. There were a few requirements for this project, though. The bench was on loan, so it couldn’t be modified in any way. Whatever solution was used had to be removable and could not permanently mount to the bench, nor could the bench be modified to accommodate the railing system.

The first several attempts failed for various reasons, but ultimately, we were successful! Specialized ends were developed that will fit on the ends of a PVC pipe that will clamp to the bench, and using bolts with knobs could be removed easily. We tried it with Tanner and almost immediately Tanner was using the system without instructors having to hold onto his hands! Within a week, other children were using the solution as well, and to this day it is still in use (although the solution continues to be modified). Not long after Tanner first took his steps on that bench was he walking in the house with his AFO’s. I am proud to say that he can walk without his AFO’s now, although he still uses them for stability reasons. 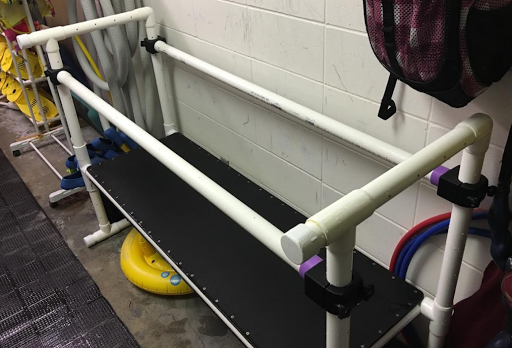 You may be thinking ‘but wait, you mentioned AFO’s were made out of thermoplastic, why haven’t you done anything with those?’ Well, that is going to be one of my next projects! There are some engineering challenges with that one though which have taken me down a completely different path of learning. Conventional filaments and FDM printing methods have some challenges when dealing with something like a brace that needs to be thin. I am keeping an eye on filament technologies though, and one day, Tanner will be using some 3D printed AFOs!

I think my 3D printing journey started out like it has for many; you like the idea of manufacturing your own stuff, and see models on the Internet that you think would be cool to print. My path, as you see here, has veered into a direction that is fairly unique, and has helped me see the potential of 3D printing first hand. With the help of all of the people we have met during Tanner’s journey so far, he is now a very happy 5-year- old who can walk on his own, is learning to talk to us, and is participating in a regular Kindergarten class. All of these are things we were not sure we would see him do. I like to think that 3D printing played a small part in that success, as with it some unique solutions to some of his problems were discovered.

3D printing isn’t only for creating the latest Groot model to sit on your desk, the latest Benchy, or your very own Terminator desk statue. It can be used for practical purposes as well. If there is a lesson that I can share from my experiences, it is this: keep a look out for opportunities where 3D printing can have some real impact on someone’s life. Life is all about the journey, and believe me, the journey of improving someone’s’ life is about as fulfilling as it can get! You never know, you may also learn a bit along the way!