One of the most common questions we get from customers is, “What is the strongest 3D printing filament?”  That’s a great question because for 3D printing to be useful, we need to be able to print parts that are strong enough for functional use.

“Strength”, however, is a bit vague as it can refer to a few different mechanical properties – tensile strength, yield strength, fatigue strength, compressive strength, and impact strength – so it’s a difficult question to answer without more information.

Don’t worry, you don’t need to know what any of those terms mean for this article. We’re not a testing lab and we can’t perform any scientific tests of those mechanical properties, and we surely didn’t find a Young’s Modulus.  What we can do is perform a comparative test – putting 3D printed parts through the same test, and seeing how filaments compare to each other.

We started with a part everyone is familiar with – a 3D printed carabiner. We scaled it to the approximate size of the aluminum carabiners you can find at local hardware stores that are rated for 150lbs.

To eliminate as many variables as possible, we printed all of them on the same 3D printer (Rostock Max by SeeMeCNC) with the same settings (with the exception of the ones printed on the MarkForged, but we’ll get into that later).

A 0.4mm nozzle was used, and the carabiners were printed at 0.25mm layer height with 5 perimeters, 5 solid top & bottom layers, and 50% triangle pattern infill.

We rigged up a force gauge to a block and tackle pulley system with an 8:1 ratio. This means that for every 1 pound we applied to one side of the system, we applied 8 pounds to the other side.

Again, this was a comparative test, not a scientific one, so things like friction in the block and tackle setup weren’t accounted for.

Each carabiner was attached to the pulley system and we used a ratcheting cable pull to apply tension until the carabiner failed. The force gauge recorded the peak force reached.

Here are our summarized data: 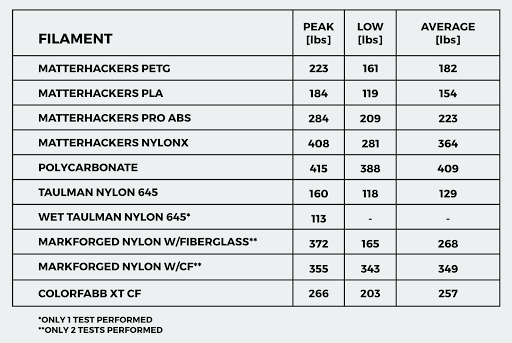 Somewhat surprisingly, Taulman 645 failed at the lowest weight of any filament we tested, but it was the only filament that didn’t break. Because it’s not very rigid, it just bent and deformed until it came off the test rig.  This toughness is obviously a very useful characteristic, but it’s not an ideal material for something like this carabiner.

The other materials pretty much failed in the order we expected. PLA was the first to break, and when it broke, it shattered. PETG also failed violently, but was quite a bit stronger than PLA. This is why it’s an excellent general purpose filament – it’s stronger than PLA and much easier to print than ABS.

We suspected that NylonX would perform well in this sort of test, but we didn’t expect it to perform as well as it did. Put simply, it’s just awesome. It’s much easier to print than regular nylon because the carbon fiber lowers the shrink rate significantly. The CF also stiffens it significantly, so it doesn’t have the deflection of regular nylon. It was over 100% stronger than PLA in our test, and , on average, 60% stronger than ABS!

As you can see, Polycarbonate performed very well, and it had the tightest spread from peak to low load until failure. Unfortunately, it was also the most difficult material to print with of all the materials we tested. It requires thorough drying before printing, and it’s very prone to warp and curl off the bed.

The carabiners printed on the Mark Forged were a bit different than the others. The MarkForged prints in nylon and has the ability to reinforce parts with continuous fibers. For this test, we printed 2 with fiberglass reinforcement, and 2 with carbon fiber reinforcement. MarkForged uses their own proprietary slicing software called Eiger.io, so the settings weren’t identical to the other printed parts, but we got them as close as we could. The settings used were 4 solid top/bottom layers of nylon, 2 outer walls of nylon, 5 concentric rings of fiber reinforcement, 50% triangle pattern infill, and 0.125mm layers.

For reasons that aren’t yet clear, they didn’t perform as well as we had expected – with both the Fiberglass and CF parts performing worse than NylonX and Polycarbonate. We’ve gotten some incredibly strong parts off the MarkForged in the past, so we’ll be exploring this a bit more to see why the carabiners didn’t perform as expected.

After watching the video of the parts breaking, and looking at our data, we realized a few things.

While we were applying tension to the 3D printed carabiners, we weren’t just measuring tensile strength. We found that the integrity of the latch and the ability of it to stay closed as long as possible was a huge factor in the max load before failure. The more flexible the filament is, the more easily the latch unseats/opens, and this leads to failure more quickly. After observing this, we experimented by using latches printed in PLA filament and NylonX for a few of the tests. For example, when we tested the Taulman 645, we performed 2 tests with latches printed in 645, 2 tests with PLA latches, and 2 with NylonX. The peak value for Taulman 645 was reached by using the NylonX latch – which makes sense given the results we observed.

This isn’t surprising, but we point it out so that we don’t get people asking us if this test means PLA filament is stronger than Nylon. With this particular part and test, stiffness was very important. Most nylon filaments, like Taulman 645, aren’t particularly stiff, so they didn’t fare well in this test, but that doesn’t mean they are not strong, durable materials. The PLA parts shattered apart when they failed. The Taulman 645 just deformed enough to not support any more weight. They more or less returned back to their original shape after removing them from the test rig.

As an aside, we did test 2 of the aluminum carabiners from the hardware store. They were stamped as being rated up to 150lbs. Both of them maxed out our force gauge at 480lbs. Then, we taped the latches open, and they failed at 168 lbs, and 183 lbs. We aren’t sure, but it would seem that the load rating is based on the load it can hold without the latch engaged.

Even though we used the same 3D printer and the same settings for all the parts, there was quite a bit of variance in load before failure. While we didn’t perform enough tests with each 3D filament to get a proper statistical data set, it appears that there may be a fair amount of inconsistency inherent to the FFF process.

Inconsistencies weren’t significant enough to change the failure point location. Every single carabiner failed in the same spot, which is exactly where we would expect the carabiner to fail. We did expect to have at least 1 or 2 fail due to poor layer adhesion or other 3D printing-related issue, but that wasn’t the case.

We have been thoroughly impressed with NylonX. We’ve been printing with it for about 3 months now, and it’s just an awesome 3D printing material. Strong, durable, easy to print, and it has a great surface finish.

And yet, the most surprising result of our test was how strong NylonX turned out to be. It even outperformed the continuous fiber reinforced Mark Forged parts – which we were definitely not expecting. In fact, the MarkForged parts, while clearly very strong, didn’t perform as well as we had expected. Only Polycarbonate had a higher load capacity than Nylon X in our test. That makes sense because even though Nylon and Polycarbonate filament have similar tensile strengths, PC is significantly more rigid, so there was less deflection and the latch was able to stay engaged longer.