Congratulations to Mekah Design Studios, our July 2015 Hacker of the Month! Mekah Design Studios has implemeted 3D printing into part of their craft. Printing for about a year, the Mekah team has been improving the speed and quality of their work with the use of their SeeMeCNC Orion. Less than a year ago, the team had a request for 20 trophies that they chose to fulfill with the help of 3D printing.

“Once we heard about 3D printing and what it could do, we thought we would give it a try,” said Alejandro Candelo, owner of Mekah Design Studios.

Having no previous knowledge of 3D printers, the Mekah team took a couple weeks to play around with their Orion doing numerous test prints. Shortly after they figured out how to become Orion experts, a project came to them that they instantly knew could be created not only more efficiently, but at a more rapid pace when 3D printed.

Sayer Danforth, Creative Director at Mekah, was approached to make several trophies for BouncherCon 2014 in Long Beach, CA. Danforth has been making trophies for years, however, he would do it manually either by carving wood or sculpting clay. Since the order called for 20 trophies, the Mekah team decided to try using the 3D printing technology that they had recently invested in.

Danforth created the bird on the trophy with Cinema 4D. He then converted it into an STL file, threw it into MatterControl, and printed the piece with support in MatterHackers Standard White PLA. 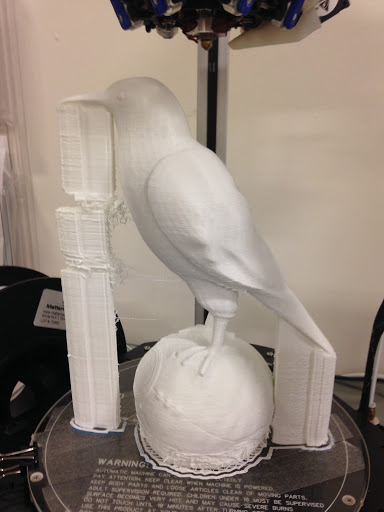 Once the print was finished, the piece was sanded and painted by Danforth and Artist/Production Manager, Erick Sauer. Once the finish on the bird was just right and dry, the team mounted the plastic onto a wooden base.

“This is just to show that you can do a little post production to 3D prints and have outstanding results,” said Candelo. 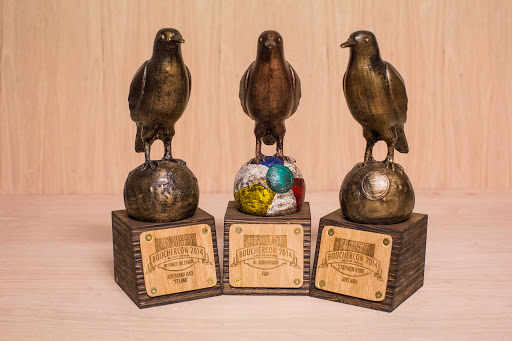 Since this project, Candelo says that they have been using the printer more and more. Not only are they able to use it for trophies, but for prototype parts and various sculptures as well.

“The technology is amazing because it allows us to be more accurate with the detail we want to produce at a fraction of the cost and time,” stated Candelo.