Congratulations to Trevor Byers, the 3D printing animal lover who gave his dog, Bubbles, the ability to walk. Bubbles the weiner dog, born July 27, 2014, came into the world without her two front legs – but, as you can tell from the picture below, this did not discourage her!

Distraught by his tiny pup’s problem, Byers got to work on the perfect aid to help Bubbles walk and get around with more ease – he specifically had the outdoors in mind.

“Around the house she could always get around by just scooting across the floor, but outside, the nasty Texas grass would scrape up her chest,” Byers said.

His first attempt was a cart using a more conventional method – fiberglass. Although the cart worked, Bubbles had a difficult time keeping the cart straight because the cart itself was not completely square.

“Having played with 3D modeling in the past,” said Byers, “I knew I just needed a way to get my perfectly square designs from my computer to something real. 3D printing seemed like the best way to go.”

Byers wanted a printer he could upgrade in the future that would not break the bank, so he went with the RepRap Tricolor Mendel. He ended up modifying nearly every aspect – the only original part is the heated bed!

“I had a lot to learn choosing a reprap for my first printer, but it was a good call. With all that I learned, I have started building a printer of my own design that will greatly increase the size of carts I can make,” Byers stated enthusiastically. 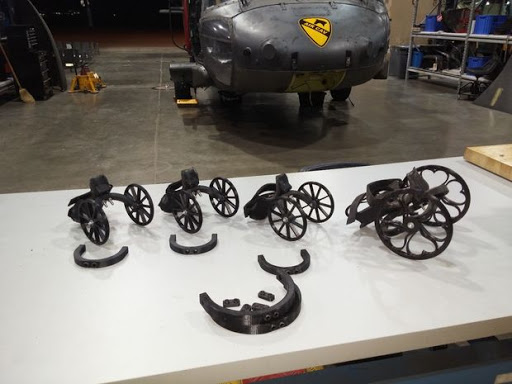 Once the printer was good to go, Byers was in need of software and filament. He went with MatterControl open source software and MatterHackers PRO series PLA filament:

“I knew from day one that the filament was an important part, so I wasn’t going to just order from some discount site. I happened to come across MatterHackers and only three days later the filament was at my door step. With the good product, low prices, and awesome shipping, it has been the only place I have ordered from.”

With everything he needed, the printing began.

As many makers know, and what Byers really hones in on, is that the development for this project was a lot of trial and error, and it continues to be a process. Byers recalls Bubbles trying the first printed cart: “I guess the first prototype was done only a couple weeks after getting the printer and Bubbles hated it. She would move in it, but it was slow.”

So, he kept tweaking and adjusting. About a month after the first cart, he had an idea of adding the third strap in the rear. Anxious to see if this was the solution, Byers let her try it out. He strapped her in and put her on the other side of the room to see if she would come to him.

“This time I could tell I was on the right track,” Byers happily recalled, “because she was on my heels following me across the room.” 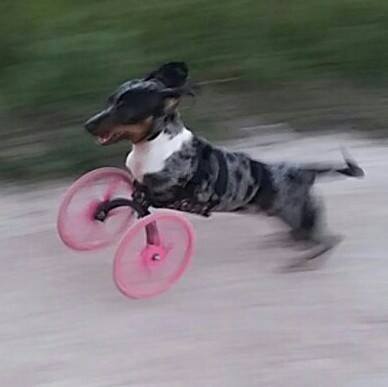 Thanks to Bubbles’ loving owner, she now has the freedom to roam about as she pleases.

“By far, the most life changing part about her cart is that it allows her to run around outside just like any other dog. And man, does she love being outside!” laughed Byers.

The small dog hopped and jumped as she got used to her cart, but with some practice she is now a pro. As Byer’s mentioned before, the progress on her cart will never come to an end:

“I think it is just as important to make sure you adapt the cart to the dog as it is for the dog to learn to use the cart. The more natural you can make it for them, the easier they will learn. I’m always watching how she moves in her cart to try and think of ways to improve it,” said Byers.

Trevor Byers and his wife, Elissa Smoak, are huge animal lovers. They have not only used their skills and resources to help Bubbles, but they are also helping other animals.They donate carts for other dogs in need, just like Bubbles. To learn more visit bubbles2legs.weebly.com  or www.instructables.com/id/Small-Front-Leg-Dog-Wheelchair