These days, if you own a 3D printer, you’ve probably been asked, “Have you printed a gun yet?”  If you’re at all like me, you’ve probably answered, “Are you out of your mind?? Of course I have!”

Does it shoot bullets like a real gun? No, that would be stupid.

I’m new to this stuff. Most of us are. I only got into 3D design half a year ago, and I certainly slept better before that. Now I wake up in the middle of the night wondering why Booleans don’t intersect the way I imagined. I’m turning things around in my head, and sometimes I see my own hands dimly lit above me by my pulsing sleep-mode Mac LED, and my hands are somehow rotating some invisible object in the air. What if I began with an extruded spline instead of a primitive?

Project One – A WareHouse 13 “Tesla” Pistol

I kill time watching the same garbage the rest of you nerds and geeks watch, and I get entangled working on goofy projects with my friends. Steve’s all like, you know, “Hey, Roy! Claudia made her own Tesla pistol in ‘Warehouse 13.’ Let’s make one too! We can sell it on eBay!” Sure, why not? So we did. 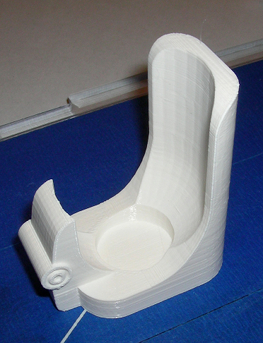 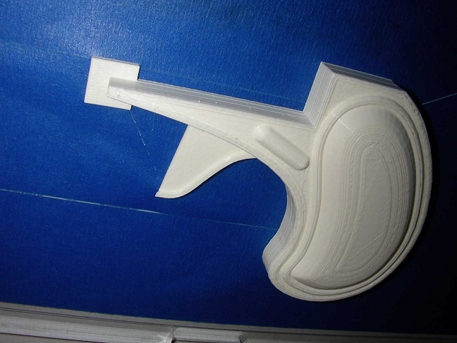 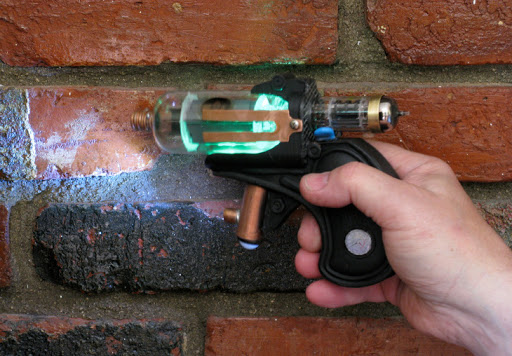 Tesla Pistol – It even lights up!

Does it shoot bullets like a real gun? No, that would be stupid. But it does have a 9V battery in its handle, and a few LEDs that light up when you pull the trigger. Okay, that’s stupid, too, but at least nobody gets hurt. Also, it helps deplete what would otherwise be a useless inventory of leftover vacuum tubes. Steve and I are hoping to net $350 or so for the final product. That way, we’re almost making minimum wage. His wife is rolling her eyes. 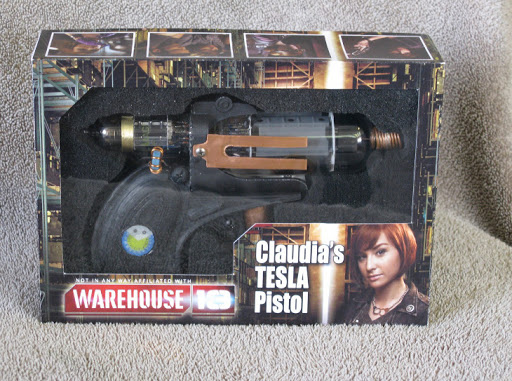 Tesla Gun – All Packaged Up

So I drew an “Old West” Colt 45. I’m using an older version of 3DS Max that a friend gave me. I snagged a photo of an authentic pistol from an auction site, traced around it the best I could, and applied some materials to make it look as realistic as I know how. I am sure many of you out there can do much better. Tonight I’m trying something new with my printer: I’m finally caving. I’m using rafts and supports, and printing the whole Colt 45 flat, as if some absent-minded hombre left it lying on a poker table. Up till today, I have carefully considered footprint adherence, ductility, overhang, support, minimum angle of repose, etc. From 3DS Max, select the object(s) you wish to print, export as an STL file, add it to MakerWare (for the MakerBot), size, position, click Make, choose your Advanced Options, and click “Make It”! (If anything appears dark gray, go to NetFabb.) 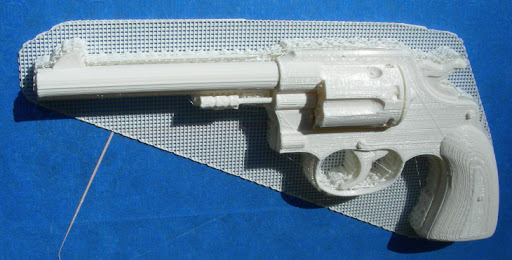 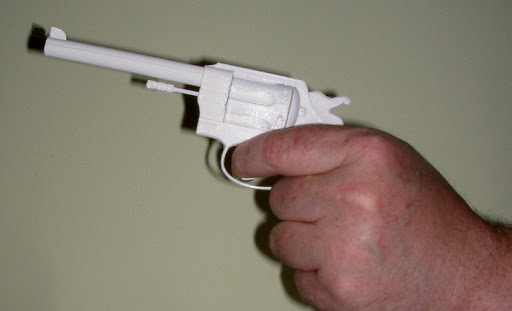 This handgun is my first shot using rafts and supports. (My print of “Claudia’s Tesla Pistol” used none of that, and encountered problems with curling and sagging.) The Colt 45 turned out to be closer to a “33” because I scaled it down. Of course, after I pulled off the supports and raft, the backside looks pretty rough (no photo). But now, when people ask me whether I’ve printed a gun yet, I can pull this little baby out of my holster and say, “I’ll be the one askin’ questions from here on out, see?”

For both of these projects, I used white PLA “Pro Series” from MatterHackers. Your printer needs to be tuned in to use it well, but once you get it honed for temperature and speed, you’ll be happy with the result! Take the time to get your settings right, and you will get better results. More accurate, but less “forgiving.”   For the Tesla Pistol we used standard Krylon indoor/outdoor spray paint from a local hardware store (no primer or preparation needed).

Have you discovered NetFabb? They are at cloud@netfabb.com.

If you are having trouble printing your object, try exporting it as an .stl (stereolitho) file, visit netfabb, upload your file (It shouldn’t be too enormous or weird), and they will “fix” it for you for free. Be warned, however: It doesn’t always work. Usually, though.

So, have you printed a gun yet?

Roy Smith a.k.a. “The Smithbot”